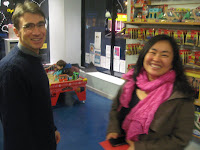 Tonight at the lovely gathering for the Parkside Prize winners at Play Kids, the Q was moved by the congenial familiarity with which local community-minded folk are working together to create positive change. Elected leaders had to share the spotlight with by-the-bootstraps types like Rudy Delson, Maddie Fix-Hansen, Delroy Wright, Atim Oton, Lindiwe Kamau, Quest Fanning and the winning architects, Parkside residents In Cho and Tim Shields (pictured) plus many others. If you don't know those names yet, you will. They're among the Q's local heroes for sticking their noses into everyone's business. That is, OUR business. The business of neighborhood. And business is good! 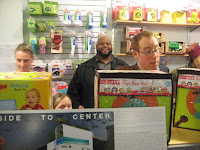 Delson as you must know by now led the charge for a prize to redesign the much maligned Parkside Avenue lead-up block to Prospect Park. He took a humble victory lap tonight. The Q watched as he masterfully led Councilman Mathieu Eugene through the winning proposal, a proposal that he noted, salesmanlike, could be accomplished for less than a million smackers. That's a lot of bang for the buck. Let's keep the pressure on to make it happen. I particularly like the action shot at left of Delson, with another Parkside Prize hero Duane Joseph beaming from behind.

Alls I'm saying is this...there's a great bunch of people committed to making this neighborhood shine, and the Q applauds you all.

AND, the latest from the traffic calming plan from DOT for Parkside/Ocean? It passed the relevant committees and full Community Boards numbers 14 and 9. The vote was overwhelmingly in favor at last Tuesday's CB9 meeting. The presentation by Jesse Mintz-Roth was superb and thorough. Guess what? This project's a GO folks. From Carrie McLaren's early wake-up call to Maddie Fix-Hansen not taking no for an answer, we hope to soon see a park entrance closed to cars and a safer walk-ride-drive for all.

(And without rushing the story, there's more good news a-coming about our long neglected subway stations along the park - Parkside and Prospect Park. That's a teaser...more info soon, and a plan to help get it done right.)
Posted by Clarkson FlatBed at 11:12 PM

This is really good news!

I join the Q in congratulating all that made this happen!

I hope the implementation phase will start soon for the Parkside Prize Project, DoT (and MTA?) plan and I look forward to the forthcoming Arts and Culture Fest!

This is really exciting to be a part of. The Prize has galvanized people and gotten a lot of attention. I hope the momentum continues! Loved getting the postcard about the Arts & Culture Fest, too. What a great neighborhood and great neighbors.

Now I just need to figure out what to do about the 'adult entertainment boutique' that seems to be opening at the end of my block (Martense & Flatbush) -- two steps forward, one step back??