The Q studied piano for more than 9 years as a young 'un. Got pretty good, if I do say so myself. But the siren song of folk, then rock, then funk, then punk, then new wave then noisy indie-blah-blah suggested that the guitar was way cooler; the drums too. And writing your own songs meant not having to learn ALL the notes. So I left my classical roots behind and set out on a musical career that lasted until it didn't, then resurfaced as a glorified hobby. My band is still together after 20 years (!) and not a day goes by that I don't play songs for my kids or tinkle along on the ivories to a favorite tune. It's a lifelong thing, this music playing, and I'm so grateful now for those long anxious drives out to the country where Mrs. Larsen would shake her head at my lack of practicing. Had someone asked "Little Q, do you want to take piano lessons?" I don't think I would've said yes. Nor would I have stuck it out all those years of painful practice. But I'm so grateful that my folks noticed my interest and proclivity and nurtured it, to the point of making all kinds of rules about practicing. Of course, music is but one of these spiritually fulfilling pursuits. Not every kid is gonna want to play music over the course of a lifetime - maybe it's foreign languages or basketball or swimming or bicycle maintenance or ballet - but for me it was the ol' sharps and flats and I'm thrilled I got in early...like buying Apple when John Scully was CEO. 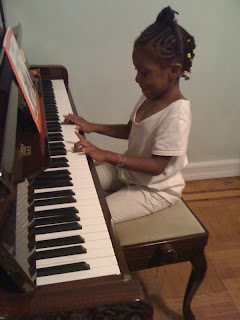 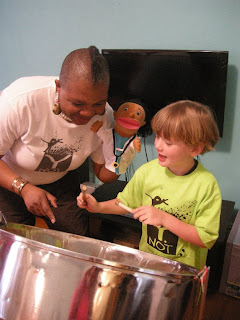 So I was feeling wistful while talking to a super-swell neighborhood music teacher named Leslie Ward. Leslie teaches privately out of her home on Lincoln Road, and focuses on both piano and steelpan (the national instrument of her childhood home, Trinidad). [When I think about it, they're a wonderful combination to learn if you decided to become ambi-dinstrumentrous - both are technically percussion instruments with things hitting other things - but if you play both you get to transpose the notes from one to another, learning even better how the math of music is all in the frequencies and their relationship to one another.]

If you want to check out Leslie in action, you need only head over to local powerhouse Play Kids on Wednesdays from 4-6PM. Anyone from 4-Adult can take a lesson on the fly for $15! Her one on one instruction is super-reasonable as well, and I think it's a major plus that she has her teaching studio right there on Lincoln Road. More on her website: ydotnot

If you're looking for pedigree, Leslie's got it. After an early education in Trinidad she came up here to attend one of the most prestigious conservatories in the country at Indiana University. The midwest was a bit of a shock to this island girl, but she got the hang of it and made a life for herself here that balanced making and teaching the many kinds of music that she loves. Heck, she was even in a avant gothy punkish outfit in the  early 90's called Maria Excommunikata, which I remember from back in the day. I'm pretty sure her band and mine shared a bill at least once, though I don't think she remembers me - my hair was down to my ass back then anyway and my jewelry was too shiny for most folks to see my face for the bling (hyperbole alert). She's also known for her work with Brooklyn Kindergarten Society, a very cool 120 year old org that provides subsidized pre-K to kids all over the borough. And I have it on good authority that she's EXCELLENT with kids, and tailors her lessons to their needs, speeds, and interests. 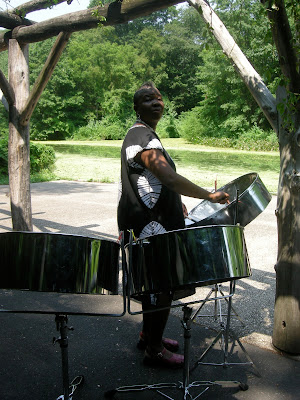 There's Leslie, looking pretty serene, making those pans speak and revelling in a beautiful day and her lifelong love of music. Little known facts: geese prefer steelpan playing to everything but food. They also prefer wheat bread to rye, though neither is considered healthy for them by park officials. Geese are also delicious themselves, though park officials also advise against eating "park geese." Park officials themselves are also quite tasty, or so I have read.

Posted by Clarkson FlatBed at 1:28 PM