The streets of NE Flatbush are abuzz with news that poor Dept of Health grades at local restaurants Castillo de las Rosas (Castle of Roses) and Mike & Tony's (Mike & Tony's) have led to their shuttering. According to DoH, M&T's got a nasty grade and are appealing (that's what DoH means by Grade Pending by the way). Lotsa folks are bummed, the Q included, as the pies were delicious, though they had trouble with quality control, and deliveries could take forever. Castillo, on the other hand, is listed on DoH as full-on closed, so the fight might be over for Castle. Melany at Lenox and Flatbush was always a much better bet in my book anyway. All the Dominican classics are done there right, and you can always count on plenty of the soccer and the baseball on the flatscreens. And the occasional drunk guy with a cowboy hat.

The Community Board met last night and we were served a heaping helping of power point presentations. Rudy Delson was there pitching the continuing story of the Parkside Prize. He's become a master at telling the Parkside Avenue saga - what it's like now and what it could be. It's downright riveting the way he tells it. The winning architects In Cho and Tim Shields were front and center. Now the question on everyone's mind - who has the money, the will and the expertise to turn fantasy into reality? See below for a possible answer...

Also on the agenda: The Brooklyn Public Library is taking a walk on the swank side with plans for a swell new "research center," which upon closer inspection looks like a groovy new hangout or pickup joint. Feast your eyes on this: 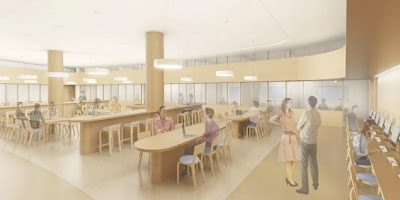 Actually, on further inspection it doesn't really look all that cool, does it? I thought renderings were supposed to wow you. I mean there's about 12 shades of tan involved there; not exactly what I'd call scintillating. BUT it's a ginormous improvement over the crappy "Popular Library" room that they just closed for the renovation, that big space just off the so-called "Cafe Mambo." You know the place -  the room straight back from the entrance where until very, very recently there was a collection of about 10,000 VHS tapes? Perhaps the best thing about the new "Research Center" is that there will be presumably fewer VHS tapes, AND a number of meeting rooms that can be reserved for community purposes, from a two-person conference room (domestic squabbles?) to a space big enough for an NA meeting. They plan to do computer training and EST sessions (just making sure you're paying attention). The Leon Levy Foundation came up with a ton of dough for this (see above?), the SAME pot of money that's making Lakeside happen in Prospect Park. It's all because of Shelby White, Leon's widow, who grew up on Crooke Avenue. Yes, THAT Crooke Avenue. (the official P.R. memo on the Leon Levy Information Commons is below...check out that last paragraph for the claim that it will "fundamentally change the way librarians interact with their customers" - hmm. Like if they walked around taking orders, a la cocktail waitresses?)


The NE corner of Parkside and Flatbush is a-scaffolded after the building changed hands recently. The folks at the deli - once Mansoob now E&M - tell me they're going to be able to stay put while the floors above get a gut-rehab. Maybe the developer will go for luxury condos? That seems to be all anyone wants to build anymore, and in this case, rather than a pool or sauna or wet bar or game room you could promote the building as having your VERY OWN BODEGA just downstairs. And WHAT a bodega! Love that decorating...

Speaking of bombed-out buildings...it would appear that there's been a change of owner at 604 Flatbush, the embarrassment next to the Patio Gardens apartments. There's a phone number to call for more info: Altisource at 866-952-6514, option 2. Alls I knows about Altisource is that it's one of those companies that made its fortune on derelict buildings. Like when the foreclosure crisis peaked there were hundreds of thousands of homes across the country that had no one living in them, you could pay Altisource to watch it for you or at least be semi-responsible while you were crying over your money-bleeding ill-timed investments.

And finally, the NYRR (New York Road Runners) brought a presentation on the Brooklyn Half-Marathon, set this year for Saturday, May 19 at 7 AM. They're trying a new course that begins at the Brooklyn Museum parking lot, shoots down Washington, right on Empire, UP Flatbush, around Grand Army Plaza, back down the other side of Flatbush, right on Ocean, right on Parkside, in and around the Park, to the straight-away of Ocean Parkway all the way to Coney. So you'll be able to see the runners pass by right near our beloved at...around 7:30 am.

As advertised, here's more on the new Library thang:


The Leon Levy Information Commons will feature the following amenities:

Popularized in new and renovated academic libraries during the last decade, the information commons concept allows libraries to take advantage of contemporary information-seeking habits by providing comfortable and exciting spaces in which library users can access, interpret and share information. Additionally, the Commons at Brooklyn Public Library will fundamentally change the way librarians interact with their customers. It will encourage active participation on the part of reference librarians who will work with schools and other organizations to anticipate customer needs, provide training and facilitate research.

Posted by Clarkson FlatBed at 11:26 PM

Talking of renovations, do you know what the plan is for the old Caledonia Hospital building. They seem to be taking it apart brick by brick.

For newbies to the neighborhood, it's on Parkside at St. Paul's Place, but some of us remember it from when we could (and did) use its emergency room.

The old hospital is being made into condos. Although when that will happen is anyones guess -- they have already had stop work orders on four different occasions due to unsafe work conditions, the most recent as 3/22. Plus because they aren't union, they got the little inflatable rat on at least two occasions!