It was a damn near perfect day yesterday, Friday June 6. At 1pm, a 100 or more of your neighbors set their lunchtime aside to protest overzealous development in Lefferts and demand contextual zoning. The quick fix, say protesters, would be a moratorium of non-contextual building til new zoning rules can be established. The reasons they've become radicalized, these neighbors of yours, vary. Perhaps that's why it's so hard for some to fully appreciate the level of distrust and disgust being displayed. People are mad. REALLY mad. Cue quote from "Network..." 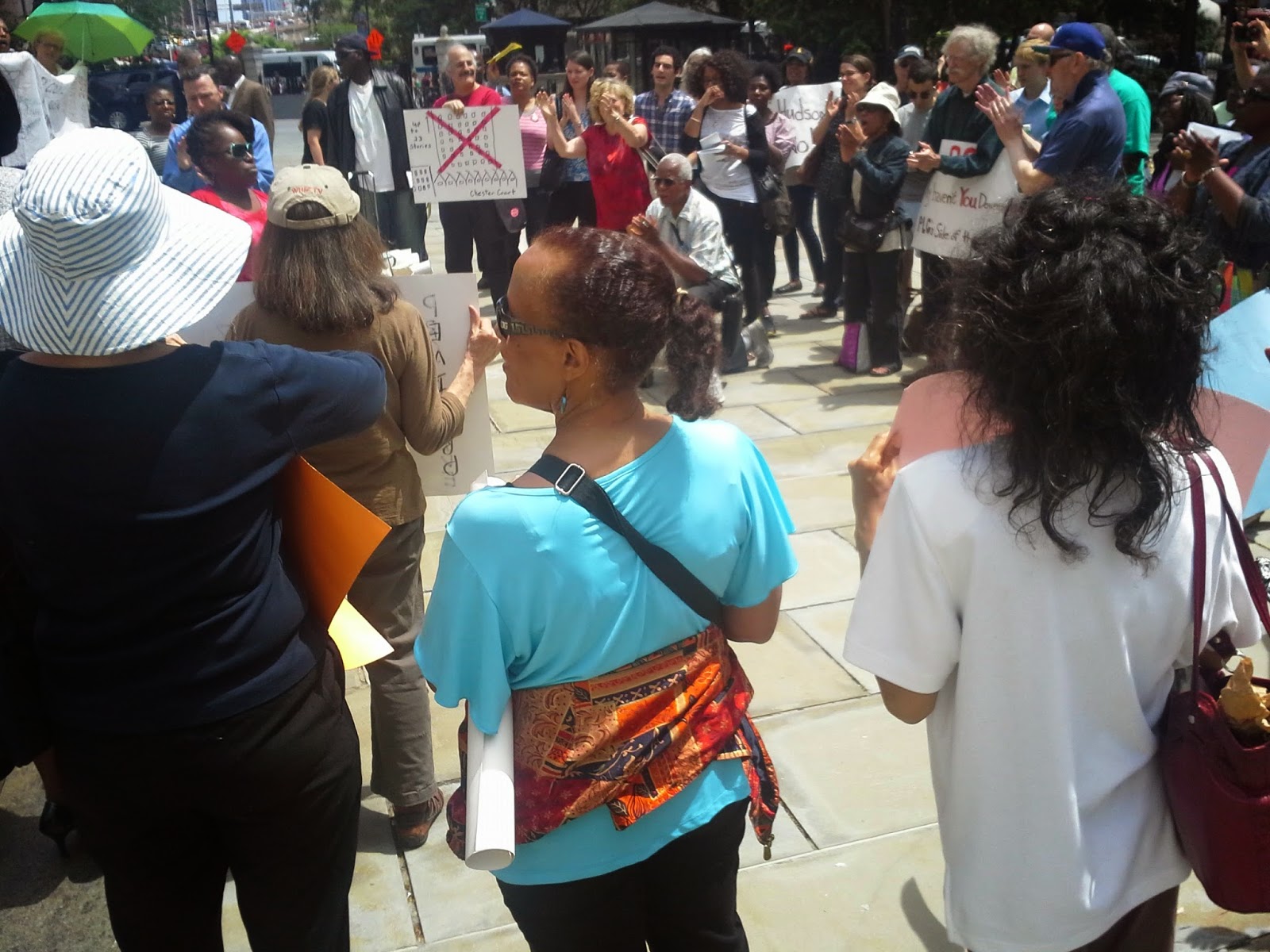 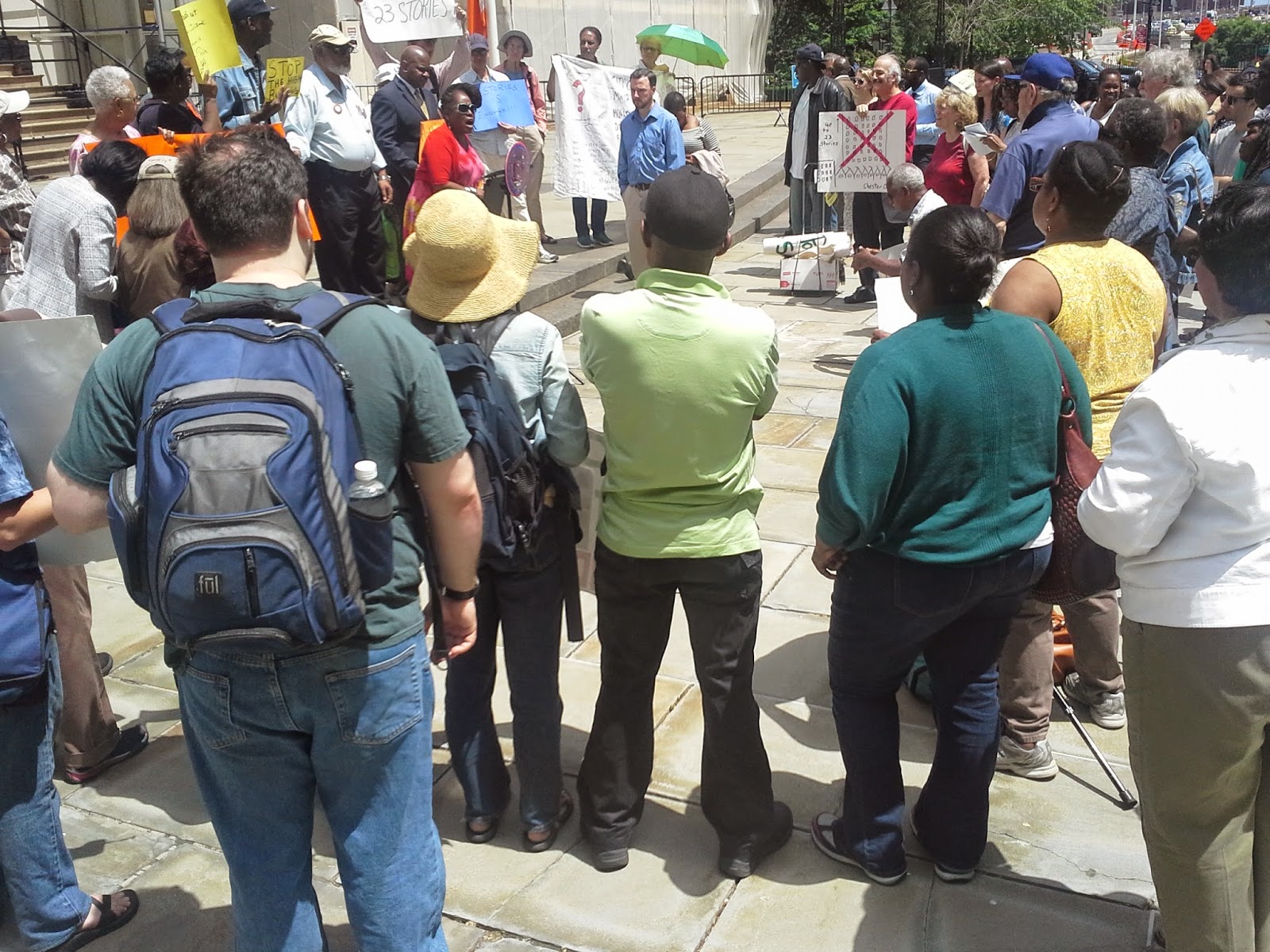 A lot of folks have asked me what the protests about 626 Flatbush hope to achieve. I find the question perplexing, since by the time folks become organized and start making noise, they're usually pretty convinced that they've identified a problem and hope to mitigate its negative effects to the greatest extent possible. My point being that it's not one simple fix that's being presented, but a whole range of ways that the aggrieved could be made whole. Picture another protest with a totally different subject - a protest against the Iraq War for instance. A whole range of solutions might be presented - from using diplomacy to dismantling the military altogether - but that doesn't prevent the protests from being seen as anti one thing in particular. Or...rarely are grievances so easy to reconcile. Was it the one war? Many wars? The implications of the war? Anger over Gore's loss? An anti-anti-Muslim thing? About the past, about the present, the future. 9/11. I'm not saying 626 is as serious as "war" war, just that its implications go beyond the surface.

Solutions aren't always easy, and in the case of a tower with physical, social and symbolic value, you've got an awfully big target.

Put another way, people are pissed, and feel shat on by the powers that be. PPEN has repeatedly stressed that they'd like to see Hudson drop the 23-stories to something more contextual. So in answer to the question "what do the protests hope to achieve," that's your best answer. A building of 8 or 9 stories, with just as many apartments or more, would be a huge victory. Add to that the gravy - more affordable units, stronger leadership from our electeds, more acknowledgments of the consequences of encouraging gentrification, the strengthening of rent laws and housing rights, even long-simmering grievances with the police...the list could go on and on.

But as I've tried to stress from the beginning, when people gradually learned of the plan to turn a non-descript "tax payer" and parking lot into a giant tower with 80% luxury apartments, you witnessed many long-time residents and people of color react with disbelief and horror. I've seen the other side too - middle-to-upper-middle class parents of young kids wondering what's the fuss - isn't development and economic activity a great engine for raising all boats? When confronted with that sort of disparate reaction, you start to wonder - are we really so different in our basic assumptions that we see the world through entirely different lenses? It's got me rethinking everything I thought I knew about life in this City. As if I'm at the center of a Q-o-centric universe.

Take the story of Kimani Gray (a piece in the Observer here), a young kid killed by cops early last year. He was shot with 11 bullets, and 7 of them hit. When I asked white folks or black the same question - do you think Kimani had a gun like the cops say - the whites mostly assumed what the cops said was true, and that the backstory, that Kimani was a bad egg mixed up with the bad kids, was substantively true. Not so with blacks. One person whom I respect a great deal looked me straight in the eye and said "Tim, he did not have a gun, it was "discovered" after the fact, and we're so used to that lie we hardly flinch when we hear it." A quote from that news story still swirls in my head:

“Right now, if I have a problem with you, I wouldn’t call the police,” he continued. “People come inside here and rob me, and I would never call the police. Never!”


Does that quote describe your deeply held feelings, whether as a resident or small business owner? Is it even possible to see them the other way? Or are our powers of empathy and understanding that weak? Or do we, with all historical hindsight and wisdom, do what generations before us have done...assume the "other side" has it all wrong, and is simply too ignorant or brainwashed to see the truth.

When a neighborhood changes dramatically, there are winners and losers. It's so easy, and so often reinforced politically and in the media, to say that increases in economic activity and dollar amounts are always positive. Who doesn't love a nice restaurant and lawfully lively (and safer) streets, full of the things "we" like to shop for? But what if those very things that make YOU more comfortable and confident, breed fear and suspicion in others? Comfort, at its core, is relative.

And then there's your council person, mangling the term "text amendment" as if he only just heard what one is, and generally following rather than leading. He even says things like "I did exactly what you asked me to do." Remember, two of the biggest responsibilities of the Council involve land use and budgets, and he's had 7 years to learn this stuff - now we're telling HIM what to do. God help us then, no matter which side of the ideological or cultural divide.

Posted by Clarkson FlatBed at 4:50 PM

Ah, Mr. Eugene again reminding me why I voted for Saundra Thomas. This guy is a putz with a capital P.