Separating the Women From the Girls

If you've been sitting on the sidelines til now, but the whole darn thing has your Irish up for one reason or a-tuther, strap on your protest boots and head on down to City Hall this Friday the 6th at 1pm. They say a moratorium on new construction while zoning can be changed is a long, long shot. But making some noise is never a bad thing, when outsized development is breathing down your neck, and casting shadows on your shoulders. 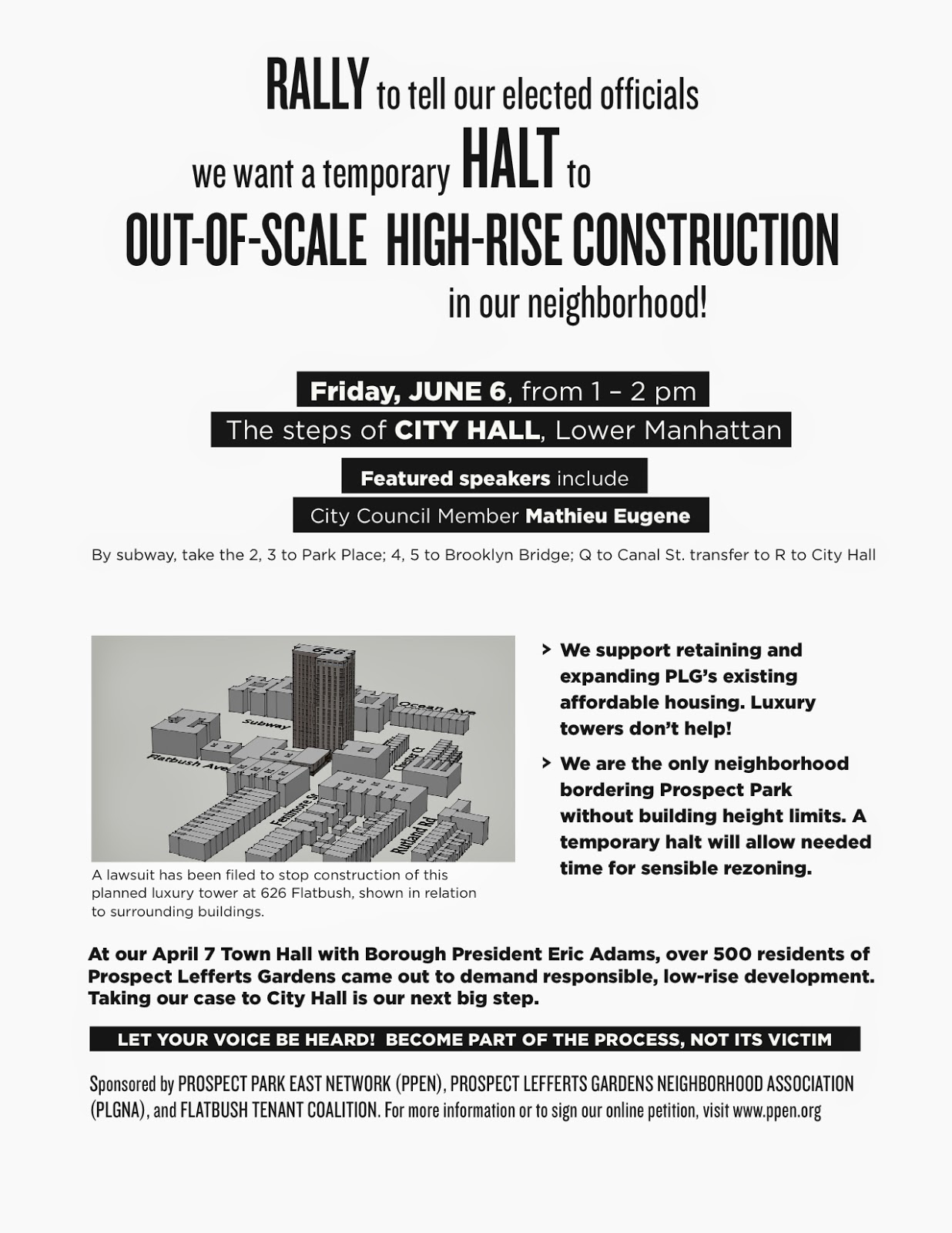 So...do you feel strongly either way? Here's your chance to add your voice to the fray, in a way that would meaningfully demonstrate your true feelings.

The Prospect Park East Network (PPEN) will host the rally on June 6, between 1-2 PM on the steps of City Hall, calling for a temporary moratorium on high rise construction along the east side of Prospect Park. The rally follows a decision on Friday by Justice Peter Moulton ordering developers of a 23-story residential tower in Prospect Lefferts Gardens to cease from laying the foundation of the building, pending his decision on a lawsuit filed by residents and community groups.

Beginning in 2008, the area east of Prospect Park has become a magnet for grossly out of context luxury towers, including a proposed 20-story tower at Lincoln Road that has since been downscaled, and the proposed 23-story tower at Flatbush and Fenimore today.  Since 2008, Community Board 9 and residents of Prospect Lefferts Gardens have made repeated written requests to City Planning for contextual rezoning of this area.  In view of the delays involved in rezoning, and the imminent and ongoing threats to the character and affordability of our neighborhood, PPEN is calling for a temporary halt to high-rise development to allow time for the area to be studied and rezoned to match the height restrictions already in place along the other borders of Prospect Park.
Neighborhood residents are concerned that the high market-rate rental prices proposed for the tower will cause a ripple effect on rents throughout the neighborhood, displacing residents and small businesses. In anticipation of these higher rents, landlords are warehousing apartments and small businesses are getting short-term leases. PPEN previously organized an April 7 Town Hall Meeting with Borough President Eric Adams, which drew over 500 residents, while a petition from PPEN calling for contextual zoning has received over 2000 signatures.

During a meeting with neighborhood residents at his office on May 22, Council Member Eugene agreed to introduce legislation for a moratorium. Eugene also promised to seek a coalition with other City Council members in order to ensure a responsible approach by developers.
City Council Member Mathieu Eugene, who represents residents of this area, will speak at the June 6 rally in support of a moratorium. Co-sponsors of the rally include the Flatbush Tenants Coalition, Lefferts Manor Association and the Prospect Lefferts Gardens Neighborhood Association.

Prospect Park East Network (PPEN) is a coalition of concerned Brooklyn residents and has the support of many community groups formed to address the out of context high-rise development at 626 Flatbush and the larger concerns it raises, including the urgent need for contextual zoning to preserve affordable housing, prevent residential displacement, and protect Prospect Park. These groups include: Lefferts Manor Association (LMA), Prospect Lefferts Gardens Neighborhood Association (PLGNA), Prospect Park Alliance, Flatbush Development Corporation, The Flatbush Tenants Coalition, Ocean By The Park Block Association, Chester Court Block Association and many other block associations.

Posted by Clarkson FlatBed at 9:34 PM