How To Buy Kings 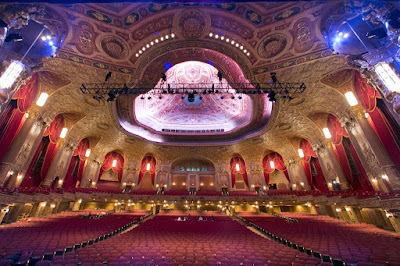 Ambassador bought the Kings. The theater that was to reinvent Flatbush, the Kings Theater, opened this year to much fanfare and a few key first-year shows. I saw Bjork. Diana Ross. It was outstanding, says Q. I saw Disney Princesses live. It sucked, just as I figured. Canned music. Even the actors voices were canned with actors miming. For a multi-gazillion dollar company that's all about pizzazz you'd think they could do spectacle right. In practice, they could've strung it out a couple weeks and called it The Barf Festival. The barf probably would have been canned as well. Canned barf.

Anyhow, the Q caught a lot of flack for suggesting that a 3,000 seat theater in the middle of Brooklyn was not a financially feasible proposition. That's alright, I know people like to be positive, and I do too. Still it's really, really hard to fill that many seats on a regular basis in a town chock full of exciting venues. Predictably, the shows at Kings are few and far between. It's just a weird size and place for a venue. Yes, occasionally something happens there that creates buzz, like when local heroes The National or Sufjan Stevens perform to rapt indie crowds. But nothing that would support full-time workers beyond bare bones staffs. I spoke to one ticket taker who said just that - it's hard to cobble together part-time work like that in order to make a living wage.

So it comes as no surprise that the theater has been sold. To another pie-in-the-sky producer. Ambassador. And they already OWN a theater in Manhattan. On Broadway, another low-margin business that's actually world famous for first-run theater. What can we expect at the Kings? Probably more of the same. And maybe (here's the great irony) more touring companies of Broadway plays. As in touring all the way over the bridge.

I still think that regular showing of classic, family films is the way to go. And cult films. Doesn't cost much to purchase, and if it's curated right, I think big groups of people would love to go and sing along to Sound of Music. Or The Wiz. Rocky Horror Picture Show. And the occasional world premiere of a movie, with movie stars in tow. Open only on weekends.

Posted by Clarkson FlatBed at 11:17 AM

Pie in the sky? I don't think so. The very article you linked to would seem to contradict that:

The Ambassador Theatre Group is a UK company (although majority owned by a RI-based private equity firm), the leading owner of live-theater venues in the UK in fact, including 12 theaters in London's West End. The Broadway theater they own is the Lyric Theater, currently showing "On the Town" (which theater friends of mine tell me is a great show), which is the second-largest theater on Broadway (I added those last details; they weren't in the article.).

The group also produces or co-produces about 35 shows a year, including, most recently, "The King and I" and "Jersey Boys," as well as the UK premiere of "The Book of Mormon." They also have a ticketing operation that issues over 11 million tickets a year (think of that fee revenue).

The co-CEOs (husband and wife) were listed as the most powerful people in British theatre (to give it the proper spelling) by The Stage magazine in January of this year (over Andrew Lloyd Webber). Check out what The Stage had to say about this "pie-in-the sky producer" "ATG has built itself a seemingly unassailable position in the industry, with fingers in practically every conceivable pie, from venue management to production to ticketing." Here's the link to that article: https://www.thestage.co.uk/news/2015/stage-100-1-5/

In short, it sounds like these guys know very much what they're doing and have pretty deep pockets. I think this is good news - looking forward to more and better-quality entertainment (I would love to see a Broadway show without having to go to Times Square and pay hundreds of dollars).

What is missing from the article, is the city's share of the sales price. Readers may not be aware that NYC (via the ESDC) paid for a large share of the renovation costs.

The City gained ownership of the theater back when it fell into tax arrears.

I don't know if they are set up for a full Broadway show - you need certain rigging and lighting in place which I'm not sure this theater has.
But I would love to see something like one of the new Star Wars movies here. The Pavillion is closing indefinitely. There will be no theaters between BAM and Sheepshead Bay.
Brooklyn has 2.5 million people, and this theater is well-positioned geographically to serve at least half of that. Anybody who is far away from all the theaters near BAM and Barclays center. There's no reason that it won't succeed if they manage it correctly. Cantorial concerts? Reggae? ( I know they've already had several Caribbean nights) Chinese pop stars?
I recently went to see a Mexican banda in Queens at La Boom. Sold out, 1000 people, packed house, tickets were $75. They could easily do that at Kings Theater with a big Mexican star.

Most touring productions of Bway shows are scaled-down to fit smaller theaters. I'm fine with that, assuming the prices are scaled-down as well. And the upside? No throngs of slow-moving tourists and aggressive Elmos and their ilk.

The question isn't are there shows that Babs would go to. It's are there 3,000 Babses on a regular basis.

I say no. The only way to make this place profitable is to do something regularly, that becomes sort of a see-and-be-seen event. Like classic, cult and big premiere movies with stars whenever possible. Like if you do Sound of Music, have some of the original stars show up. And for Rocky Horror or Car Wash or Coming to America. You know?

Yes occasionally a big ethnically popular star will work. There are fewer of those than you think. And the space is already crowded, with other venues vying for top acts. And booking organizations that specialize in world acts. It's not that this theater couldn't do well in another city. It just can't in NEW YORK city. Not with polyglot programming without an identity.

As to profit being made by EDC or others, that would be the best possible outcome. Taxpayers repaid. But the bigger question is how to keep this place from falling into disrepair and neglect AGAIN. And that takes a bold, successful plan. And while Ambassador is successful in its other endeavors and has deep pockets, that doesn't automatically translate into butts in seats.

blah blah, don't u have something better to talk about? you're a man chilld with a vagina.

re: "blah blah, don't u have something better to talk about?"

Not sure what you are implying. That Ace was losing money with Kings and had to get out? I think the opposite is true. Ace created a great asset that is ready for a producer who knows what they are doing and can bring greater resources to the venue. Ace just didnt sell the Kings, it sold the whole company and its five theaters to ATG, a huge international company.

This venue does not need to be filled every night to make money. As you note, most of the staff is part time. They have quite a few events over the next few months (10 in September, 7 in October, 10 in November, etc.) and many tickets are in the $50+. Turning this into a weekend family movie palace is a sure way to run it into the ground again.

You need to create a niche. And the price of a ticket reflects the cost of the talent. Promoters take baths on popular acts all the time. It's gonna take whip smart programming and marketing to make that place profitable. Flatbush can't compete against Manhattan where your market is the whole metropolitan area. I love the optimism, but the last few months prove how hard its gonna be. I promise you they came nowhere near covering expenses.

Oh screw it - why try and do anything out of the box? Tear it down and make it high rise condos. Will everyone be happy then?

Ernie: The reason I'm talking about it at all is because no one IS thinking out of the box. They think they can apply a national model to NYC. I want this thing to succeed, but frankly I don't even think it needs to be a for-profit enterprise to make it. My guess is it will be bounced around from one owner to another until people figure it out what is and isn't possible. Why not think creatively NOW?

My other prediction? Same thing with Lakeside. They are not making money yet, and I suspect the City will have to step in at some point. Services will suffer, and less people will go. I'm tellin' ya's I've lived through enough of this boom and bust stuff to see it coming. The Alliance is frankly ill-equipped to deal with this at all, and there's tension a-brewin' behind the scenes.

Lately I've been feeling that the Kings' performance schedule isn't as varied as it could be. ..