Michael Gerstein For Judge With Caveat

So just how committed ARE you to representative democracy? Tomorrow is the true test for all you lovable little Democrats. Slim pickins. There's but one race in our area.

His opponent has a very cool name -Isela Isiris Isaac. But Michael Gerstein seems like a good guy, a likable nerd, and I have no intel to say he should be booted from his gig even after 10 years on the bench. Gerstein is endorsed by just about everybody, and the Q expects him to win handily.

But I got a note from a reader that gave me pause. Gerstein's wife is a pediatric dentist, Dr. Lois Jackson, and she apparently sent out a card to all (or some of) her patients that looked like this: 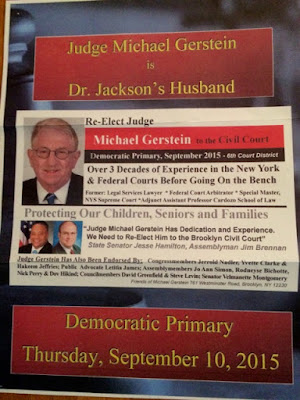 Question: Isn't this a breach of doctor/patient confidentiality? I'm not saying a law was broken for sure, but it seems odd that a doctor/dentist/psychiatrist would use their client list for electioneering. And while I suppose Dr. Jackson would be within her rights to say to a patient who's under the drill, or in her case who's CHILD was under the drill, "by the way my husband is a really great guy and he's running in an election tomorrow." But by mail? Seems squishy in the ethics department.

So that's it. Civil Court Judge. That's all you get to pick tomorrow, and as we all know the Dem gets the nod in these parts. So you'll be picking the person who you one day stand before after you've done something dastardly.

Pick wisely. You never know when you might drop your scruples, or be accused of dropping them.

I'm probably not going to vote for Justice Gerstein after he dismissed two cases that would allow members of the Orthodox community to stalk and harass a young woman who was brave enough to stand up for herself and testify against a man who sexually abused her. (citation: http://www.nydailynews.com/new-york/nyc-crime/judge-tosses-evidence-man-accused-pic-sex-abuse-victim-witness-stand-article-1.1918058). Disappointing to say the least - maybe we need a change if this is the kind of decisions he's making.

This type of electioneering seems rather abusive. I wouldn't go to a dentist because her husband was a judge, why would I pick a judge because his wife was a good dentist?

P.S. She's not actually that great a dentist. We hated her when we took my son a few years ago.

If the dentist's patients are somehow informed that their information can be used for 3rd party advertising, then this is legit. If they are not informed, then it's possible that a law was broken.

Ditto to what the first comment mentions. His dismissal of sexual harassment cases gives me way more pause than a badly designed electioneering postcard his wife sent out. Was surprised these dismissals didn't warrant a mention in your post.

My kids went to Dr. Jackson and we always followed her political recommendations.

Quite the opposite for me. Every time I got hauled before Gerstein he'd tell me to get my teeth cleaned and where to go. I mean, he's a judge, what was I gonna do?

Well, he won the ellection, and this comment is a little late, however, I am a defense attorney and happen to know that as a criminal court judge, Gerstein is fair and non biased regardles of race or religion. Regarding the comment of "offnbalance" The case with the pics was dismissed for a number of reasons, 1. one of the acused did not take the pics, and the prosection dissmised on its own, 2. the other had his phone reviewed without a warrant. Additoanly, the comment assumes guilt soley because of the accused being orthodox. I am sure glad "offnbalance" is not a judge.