Shooting. Plus Reality Check on Shootings

Sigh. Another shooting, this time in the NE Quadrant. And while the police may consider the per unknown, precedent suggests the victim knew his shooter. Babs relayed that the victim was the owner of Taste of Brooklyn. Unfortunately, it's proven true. Rick had many friends, and as I learn more I'll be sure to post a tribute. His neighborhood bar and restaurant was just starting to get its footing. It's a damn shame. Father, son, longtime neighborhood resident. When a motive emerges I'll be sure to share.


Today approximately 5 A.M. a 37 year old male sitting in his car in front of 223 Lefferts was shot twice by unknown perpetrator(s). The victim drove himself to Kings County Hospital were he succumbed to his injuries at 1137 AM. Anyone with information please contact the 71 Precinct Detective Unit at 718-735-0501. 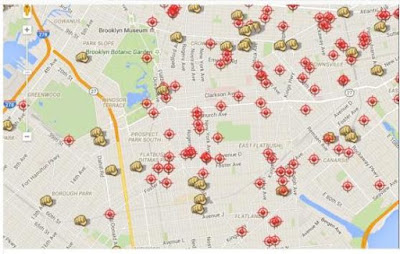 In case you think that Lefferts has a lockhold on shootings and crime, it's always useful I think to broaden the view. Above is a (blurry) Spotcrime map of shootings and assaults since the beginning of the year through just before the Ali's shooting. As I've mentioned before, there are significantly more shootings to our north, south and east than in Lefferts proper.

Make you feel less or more safe? Remember, these aren't generally shootings of law abiding citizens. Black, white, yellow, green you may be a lot safer thank you imagine.
Posted by Clarkson FlatBed at 12:02 PM

A neighbor tells me that the victim was the owner of the recently-opened Taste of Brooklyn restaurant/bar on the corner. No sign of his being involved in any sort of wrongdoing there.

Yea but to our northwest there are basically zero. A tale of two New Yorks, anyone?

Alex. If it were a new situation, maybe it'd be worth investigating further. But as long as I've been in Brooklyn (27 years) that has always been the case. Crown Heights, Bed-Stuy, Flatbush, Brownsville, East Flatbush, East NY, Clinton Hill. That's always where the majority of shootings take place. It's an intractable problem that stems from a long and tortured history. It's not the time to go into it - again - but just because a few fancy buildings go up and the limited supply of townhomes skyrocket in price, the underlying facts and demographics remain largely unchanged. Coffee shops don't stop a culture of violence. As long as we're prepared to talk about the relatively few people involved in this culture, and not demonize whole groups of people based on color or even income, maybe we can get somewhere on this. But if the last couple years are any indication, we're making almost no forward progress.

Unfortunately Babs is correct about the victim's ID. We all wish it wasn't the case, as he has been part of this neighborhood forever, and was a homegrown success story - opening a restaurant that outclassed anything that the current crop of newcomers offers.

I agree with you. I just don't agree with our mayor, hence my snark. I would think that a major who ran on "A tale of two New Yorks" would be out here freaking out about quelling violence, but he's nowhere to be seen. He's acting as if nothing is happening, bemoaning our "complaints."

I must say this... as a neighbor, customer and friend to Rick, the deceased... I have to say their is no silver lining with this killing... this wasn't a statistic, it wasn't gang related, it wasn't drug related... this was pure violence, hatred. Rick was a pillar of this neighborhood, a success story, a great father, a real son of the neighborhood... he grew up right where he was killed... exactly ... He was about a month in to his newest venture, a restaurant literally across the street from where he was raised... his Grandmother had always wanted that corner fixed up and he was so damn proud to know how much his Grandmother would be pleased. This is a tragedy... pure and simple and as much as I want people to be happy and safe, well, that is not the reality this time. This murder was as senseless and unwarranted as it gets... We lost a neighborhood hero for real... no silver lining but that doesn't mean give up we should come out more united, more community minded... we can't let the violence win.
Thanks for listening and no offense intended, I am just destroyed over this...

Makes me feel ill. I live right next to Taste of Brooklyn (and enjoy their yummy waffles)- what a tragedy. My heart goes out to every one there and to Rick's family and friends. Damn...

Do we have a motive?! I'm just trying to understand. Seriously.

Very sad my condolences to Ricks family. I met him and ate dinner with him on several occasions. He was a very talented and warm person.

Awww, did I hurt you wittle fweelings?

Because if you were a man and not a pussy, you would debate the facts instead of cowering in fear behind your laptop.

What a horrible waste. Here is an interesting article from the Atlantic on the crisis of violence among black men in and how the mayor of new orleans is addressing it.

For those wondering who this d-bag named DEK is, I'm publishing his mature response to me not posting his despicable comment, in case he says something in the future worth publishing. That way you'll know what sort of upstanding citizen he is! His first response to my post was to remind us that it's blacks and latinos killing blacks and latinos. Really? Thx Dek! We hadn't noticed. Then he goes on to defend the blatant disregard for civil rights in order to catch maybe one gun in a thousand. And of course, any rise in murders are due to de Blasio according to DEK, despite the fact that there are rises small and big all over the country in towns with all sorts of leaders.

Folks, there are Aryan Nation types right here in our own backyard. And while it pains me to know this, I'd hardly be accused of being the guy cowering behind his laptop in response. If anything I'd LOVE for this guy to stop cowering behind his so I can call him out, name, email, photo and phone # for the bigot that he is.

Amen to that, FlatBed!

Hey, Clarkson, you have small hands and you wet the bed. Goodbye. Enjoy the zoo you live in. Just don't bring your whiny liberal ass here to South Brooklyn.

A Cuomo aide was just shot on Sullivan near Rogers. The Times says there was a shooting last night and a stabbing at "another corner of the Park" but neglected to say which one...

It's truly sad what happened over the weekend, but I truly think it is high time that this parade is moved. I know that many in the community would be saddened, but this is the largest parade that doesn't take place in Manhattan, and the annual violence seems to be completely uncontrollable by the NYPD.

J'ouvert may need to go the way of the dinosaur as well. We shouldn't be surprised when people head out and start drinking in the streets at 3am to when the parade starts that there are problems.

Its time to put the West Indian Parade in Manhattan with the rest of the ethnic celebration parades and the more neutral ground of the City will help to stem some of the annual violence.

(Sorry if this is duplicate). I live directly next door to the cafe. Moved in a few months back. Met / spoke with Rick a few times before and after they finally opened. Seemed like a nice guy who wanted to do well for the block. Heartbreaking. Is there any news?