What's the story at the Flatbush Caton Market? Many of the vendors moved outside, back to the parking lot, the very situation that the indoor market was meant to end, years ago. Frankly, the Mall is so poorly used and trafficked that I'll bet a lot of the vendors WISH they were still out doors, like before the Market was built. Read about its history here:

But lest you think they're tearing down the brightly colored market, this just in (post it and they will come!):

THIS UPDATE FROM A TRUSTED INSIDER:


The roof on Caton Market has been leaking for some time.  The funds for repairs come from Eugene.  The work was scheduled to begin originally in late 2012, but kept getting pushed back.  It began in June, and is scheduled to last much of the summer.  The tents are meant to provide temporary spaces for the displaced vendors.  The funds for the tents also come via Eugene.* 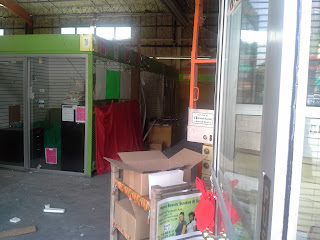 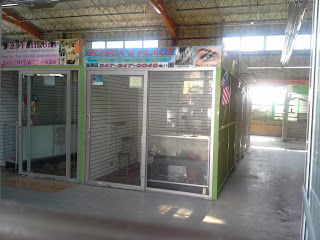 Then of course there's the White Whale to my inner Ahab - the tree pit next to the alley on Flatbush, behind the Great Whale of a Building at 225 Parkside. This pit is the pits, and every time we clean it up it goes right back. Someone's leaving their personal garbage here, which leads to a massive trashy pig pile. That someone's the first on Q's crumb list, last on his crumb list, and every crumb in between! For shame!

*The Eugene referred to here is Councilman Mathieu Eugene, not Levy, Debs or O'Neil as you might have supposed.
Posted by Clarkson FlatBed at 9:56 AM

Can the building be ticketed for this? Do you think a concerted effort by all Q readers to contact 311 would make a difference or is there a particular person we should contact at Sanitation?

They've been ticketed and will continue to be. Please call 311 everytime you see a mess on Flatbush. The numbers go right to Sanitation.

BUT a much more direct and effective way is to call Pearl at CB9:

What exactly are the rules for garbage along the Flatbush corridor? Can businesses leave trash out for pickup on certain days? Or are they supposed to have private haulers? How often are the cans supposed to be emptied? I live on Martense and every week the trash floats down my street like tumbleweeds from Flatbush's garbage piles and the people who just dump their to-go garbage out their car windows.

Rules are super straightforward. All businesses must have private hauling - period. The sticker stating that they have a current contract must be visible to all. Many on Flatbush fail to do this, and leave trash out at the curb. That's only for residents.

Part of the problem is that resident/commercial divide. So easy for businesses to see trash out there and try to sneak it out with the residential. Likewise with individuals.

Plus supers don't collect garbage from residential adequately, leaving some apartment dwellers to bring it out themselves at the wrong times. Since it's hard to tell who it's coming from, some figure, why not let it be someone else's problem?

Some have suggested more cans, but this only leads to more dumping. You're not supposed to throw anything but walk-around trash in those cans, but people regularly dump in them. Plus, once someone sees a pile of trash, they just throw theirs on top.

Each biz is required to sweep in front of their shop to 18 inches out in the street (to discourage merely pushing it off the curb.

You want more? Go to DSNY's website and it's all there.

This is the bane of my existence, this trash. It's pretty much why I joined CB9 in the first place, and I've made very little headway. At least bizzes are starting to get tickets, which they weren't before. Sometimes they complain about being targeted for trash that they didn't put out. I have no tolerance. I take care of my sidewalk, you take care of yours. Deal folks?

At what cost?
"Nearly nine out of 10 stopped-and-frisked New Yorkers have been completely...

Before you get on a commercial airliner, 100% of all passengers are Stopped, Questioned and Frisked.

Meanwhile, as we know, the body scanners see through your clothes, turning everyone who passes through into entertainment for the TSA crew.

Given the recent revelations about the NSA, you can be sure the images of passengers are not exactly safe from prying eyes.

Nevertheless, the people disturbed by Stop, Question and Frisk are always ready to offer up rationalizations for security procedures at airports.

What's the cost of conducting such a complete Stop, Question and Frisk at the airport? Grumbling among irritated passengers while air travel grows more popular than ever. The good outweighs the bad.

How about a story on the news today that Parkside Ave will now be skipped for the next 4-5 MONTHS or till "mid fall" by Manhattan bound trains. I can assume we'll then get blasted on the Coney island side. I swear sometimes I think the grinning overlords of the MTA look at Parkside while they're sharpening their pitchforks and cackle "yes, that point there. THAT is the anus of the earth."