They're Locking the Playground At Night 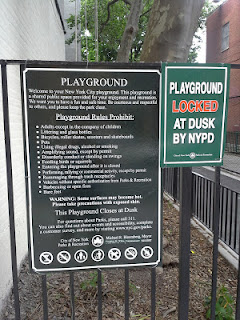 Months after hearing that the NYPD was going to start locking the Parkside Playground at dusk, tonight was the first night it happened. A neighborhood activist and the Q met today with a Captain from the 71st and a manager of parks for Community District 9 and actually watched the keys pass from one hand to the other. And a reader confirmed that at about 9pm tonight, the playground was locked shut for the evening. We sure hope it gets opened again every morning! Also discussed at the meeting was the creation of a Friends of Parkside Playground group. Email me if you're interested and I'll pass your info along to the organizer.

In other Parkside Playground news, a group of concerned neighbors formed a 311 chain and complained the heck out of the fact that all but one swing has disappeared. It's been that way for months. More than 15 people gang complained, and low and behold, we all got a note this morning that the swings have been ordered, to be replaced soon. Bet your butt we'll be staying on top of 'em til they arrive.

I think that 311-bombing has a lot of promise. If neighbors raise issues either here or at the Lefferts board on Yahoo, followed up by 15-20 complaint calls, we might just get some service around here.

Can we start a 311 chain for trash in the area? The streets are so filthy. It might be helpful to all get on a google doc for neighborhood concerns. I'd also like to do plants around the trees on my street (Bedford), but maybe it'd be helpful to start an association, or get more people on board in terms of beautifying the area.

One way to address the trash issue is to get the trash bins back.

I have been thinking about the disgusting mess on Flatbush from Empire to Lefferts, right outside the train station. Tim, would you recommend a 311 bomb for this area, or some brave soul call Pearl Miles at the community board? I wonder how much of this mess is generated by the MTA associates?

I'll take a pic when I ride by later. Everytime we call, they clean it up, but there's no longterm plan to stop the messes.

I think it's dumping, Snob. People see a little stretch of land without anyone watching, they open the hatch and drop a load on the street. I saw some guys once at that spot, literally, drive up in a van, roll open the sliding door, and dump an entire seat bench from the van in the tree pit. As they started off I stopped them and asked what they were doing -- they said they thought someone could use it! I decided that Discretion was the better part of Valor and decided to let them go without making a Citizen's Arrest.

It sat there for a couple weeks of course, before Sanitation picked up on a call to Pearl Miles. She really is the one to call in situations like that.