Hello Living - Gearing Up To Be Big Player in Lefferts Area

A few days ago, the Q reported that a Hello Living development is going up at New York Avenue and Hawthorne. Now, from a reader, comes word of another project on the north side of Lenox near Nostrand. Forget for a moment that this time out they are DEFINITELY stretching the limits of a neighborhood known as Prospect Lefferts Gardens (though followers of the Q will know I am not a fan of such rigid nabe boundaries, and I don't care for the name at all. Well, I like "Prospect Lefferts Gardens" a lot more than "PLG," though Prospect like the park, Lefferts like the original homestead and Manor I get. But it does not excuse the Garden(s) when there is only one Botanic Garden. The hyphen sometimes employed between Prospect and Lefferts is simply inexplicable and indefensible, no matter WHAT our delightful neighborhood historians might tell you. But now I've lost focus...)

What's news, beyond the fact that development is heating up around here, is that HL asks that YOU the buyer pony up dough long before the building is built. $25K initially, then at least $300K before even seeing the final product. Now, I understand the idea of buying before receiving. I do it on Amazon.com all the time. But...is this really a legitimate way to sell apartments? I thought developers had to get their own financing for buildings. And it seems awful risky for the buyer. What if the project falls through? I read the contract and I can SEE that you get your money back. But seeing it written and actually getting a certified check for $325,000 seems like quite a bridge from clouds to earth. Not exactly a rainbow either (did you see that on Saturday after the downfall? Goosebumps...)

Here's the publicly available brochure. Ping* me if you want a copy of the "confidential" terms statements. 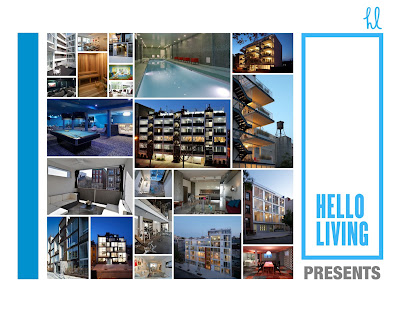 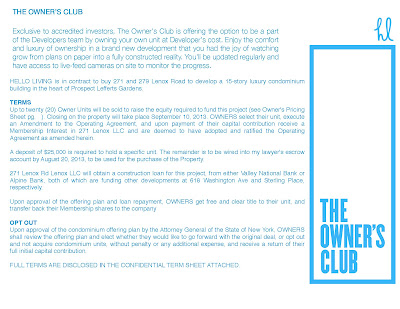 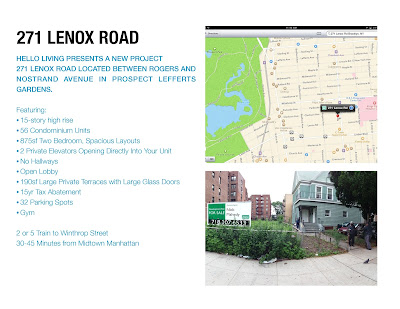 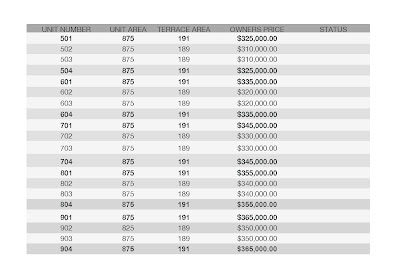 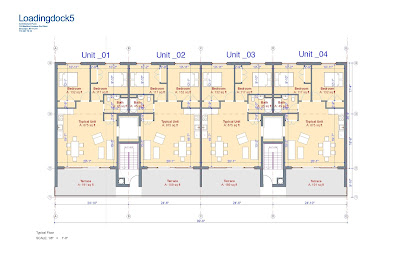 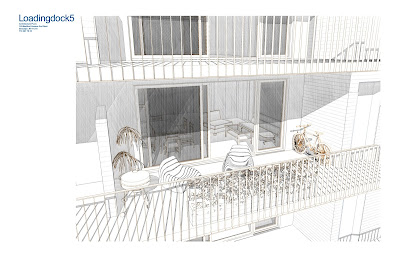 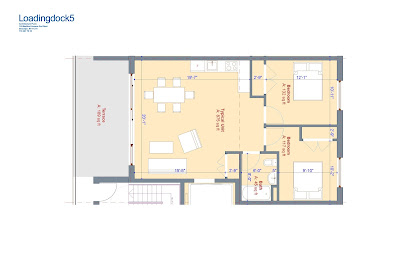 *A certain NY Times employee living in Lefferts tells me "ping" means communicate with me whatever quick way you know how. Email's best for me, thank you. Or rather Electronic-Mail, wherein the hyphen is okay with me. And shouldn't there be a comma after Hello in Hello Living? hee hee
Posted by Clarkson FlatBed at 1:42 PM

"The hyphen sometimes employed between Prospect and Lefferts is simply inexplicable and indefensible, no matter WHAT our delightful neighborhood historians might tell you"

As one of those (I hope) delightful neighborhood historians, I agree. It seems to me that that damned hyphen was just a mistake made by the Landmarks Preservation Commission.

http://en.wikipedia.org/wiki/Ping . I believe the first meaning is the one intended. Ping is test of a connection . It makes sense and its appropriate.

Gardens is plural because it is the Botanic Garden plus our own gardens throughout the neighborhoods.

And this Owners' Club thing is SO scary, especially given this developer's litigious history with the previous Hello Living developments (which also stretched the neighborhood limits of Prospect Heights vs. Crown Heights). Clearly he is doing this because banks won't finance him anymore. And in terms of getting your money back, good luck with that - a simple bankruptcy filing is all it would take to keep that from happening.

Buying pre construction off of plans, from an established developer with financing in place, is one thing (happens all the time in NYC) but this is totally different and smacks of a scam - stay away!

The money is held in escrow administered by a third party independent lawyer. The money is not financing the purchase of land or construction.

Then why don't they disclose the sources of financing?

Anon at 9:06pm:
So he gets a construction loan that is secured by the buyer's deposits as collateral? What happens if he is unable to complete construction on time or on budget?

Just pointing out that the neighborhood is "speculative" to begin with. There is no clear demand for condos at that price for those blocks. When Manhattan buildings sell before construction, it's super clear the bank's gonna get its money. It's Manhattan after all.

If the money is tied up in escrow, I actually don't see how it's being put to work at all. Why isn't the deposit enough to hold your spot? Ludicrous if you ask me.

Whatever happened to developers building buildings? That's how the system's supposed to work. If you can't find a loan, maybe there's a reason for it. And if you can't finance it yourself from prior earnings, maybe you shouldn't be in the business.