I don't know about you, but there's something about Election Day that brings out the worst of my self-righteousness. I start thinking about all the people all over the world that can't exercise their right to vote because they basically don't get to vote. Not just not have the right to vote, but, not have the right to eat or practice their religion or...live. And then I think of all those lazy-ass Americans who can't be bothered, on a Federal holiday no less, to go drop a piece of paper in a very suspicious looking scanner. I have to take a deep breath and remind myself that what other people do or don't do is none of my damn business, and a flawed democracy like ours takes all comers. And then of course, you actually walk in and see the smiles and hellos of all your neighbors and you're reminded what a pleasure it is to live in a society where we can disagree strongly and still manage not to slit each others' throats. Very often.

That any sick mind could actively try to deny someone the right to vote, with all the carnage and depravity in the world, and the twisted history of the vote in our own country, that worries me more than who wins the Senate. Because anyway in two years everything will be (sort of) different again and who knows, maybe we get a woman president and trans representatives and a few actual liberals to boot. Could happen. Would they have guessed a black president just 50 years ago? Heck they were having trouble voting for a Catholic back then. Now we've got one in Albany suiting up for the big show. Does that guy make you wrinkle your nose too, like someone just cut the cheese?

So I walks into the cafeteria at PS92 and I note how almost no one is young. Is it because I'm voting at 7pm? Or do people not vote until they're 35, the way they don't marry or have kids til later either these days? You see so many older black women, dressed to the nines, some barely able to get around, and it's a reminder how much this voting thing really means to some people. Should mean to all of us. You get teary, or I do anyway, until you remember that there's basically nothing on the ballot worth getting excited about. Except Wavny of course...

But then word comes into my inbox that Voter Suppression is happening RIGHT HERE in Central Brooklyn. Insidious. Appalling. At the Flatbush branch of BPL, the elevator was out! No way to get up the steps! 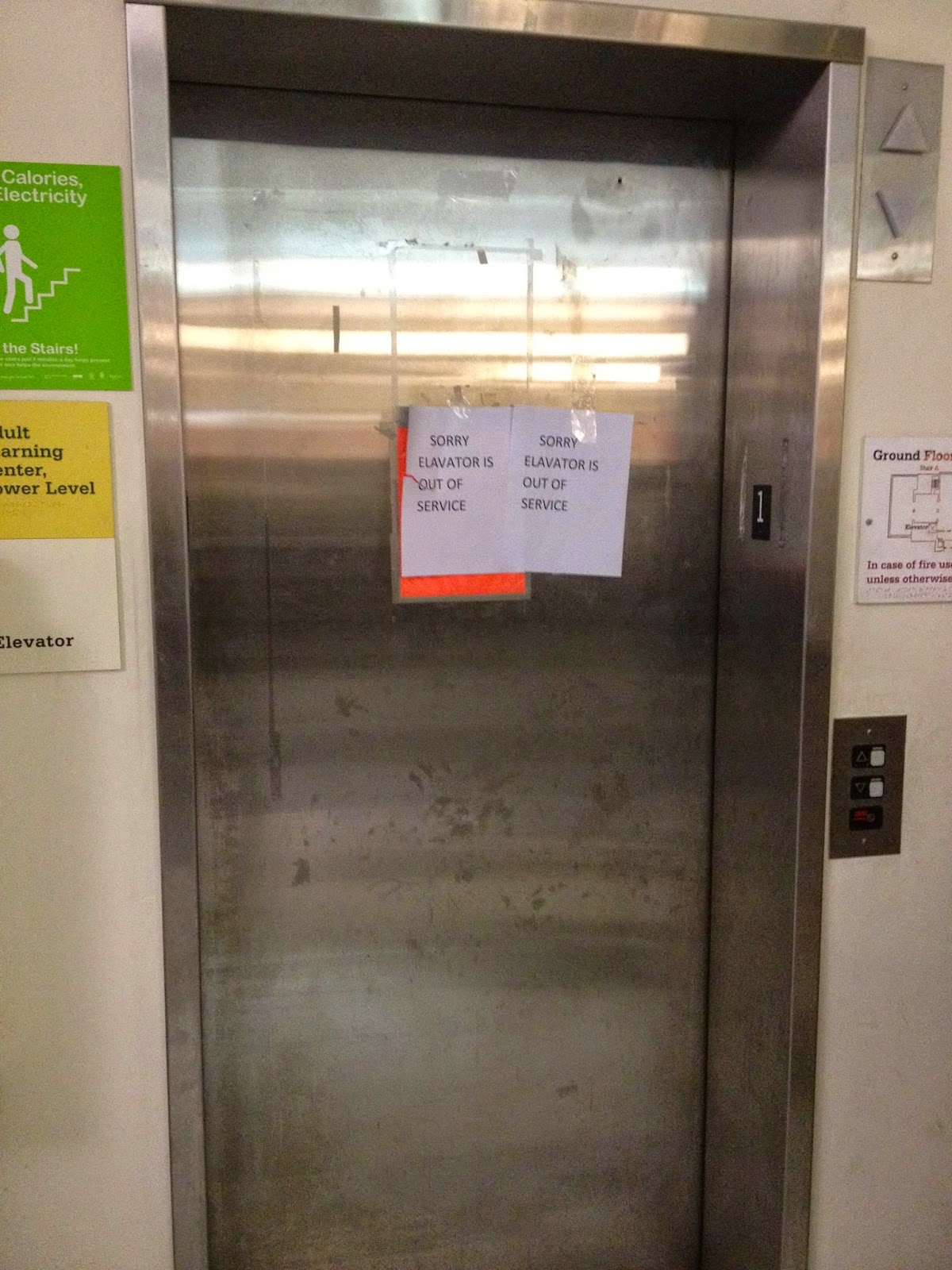 The eagle eyed reader who sent this picture wants you to know that she saw at least one cane-using old lady working her way up the steps, one teetering step at a time. I suppose some folks will need to be carried. And I'm sure some self-righteous dude like me is gonna feel pretty good tonight for having done the carrying. You go Mr. Muscles! Carry those wheelchairs for capital D Democracy! (find out who they're voting for first though before you bring them up).
Posted by Clarkson FlatBed at 9:48 PM

Voter suppression is imaginary. And in Brooklyn, it would be pointless since virtually every elected official is a Democrat. This is a midterm election, offering no surprises. Has Astorino conceded yet? Did Yvette Clarke campaign for more than five minutes?

There's plenty of voter apathy, especially in NY City, where no more than 20% of registered voters turned out last year to vote for a new mayor. About 16% of voters supported de Blasio, enough to give him a relative "land-slide victory."

After the election I predicted he wouldn't name Bratton as police commissioner. De Blasio fooled me and gave Bratton the job. But now it looks like Bratton is on his way out.

On the other hand, it looks like de Blasio has realized he has to go along with developers if he wants to get anywhere close to his housing goal. His acceptance of reality means lots of new tall buildings will rise all over the city.

On the other hand, when it comes to schools, there will be the usual billows of endless talk, but no substantive changes. Like always. Then, from Matthieu Eugene, there will be his usual self-inflating senseless talk and from the self-appointed guardians of the neighborhood turf, like Alicia Boyd, there will be roars, shouts, yelps and growls, all in pursuit of an imaginary future.

Voter suppression outside of NY is NOT imaginary, but what is more infuriating than anything to me is all of these supposedly "liberal" or "progressive" people who don't vote because, "it's a corrupt system," or, "my vote doesn't matter," or whatever other crap they're coming up with at the time. Makes me sick. It was, as always, so lovely to see my neighbors this morning at the polls. And no_slappz if you're just realizing now that DeBlasio is and always has been in the developers' pockets you're even more clueless than I'd thought - why I didn't vote for him.

And I don't think Yvette campaigned at all, nor did her daughter-in-law, who suddenly began using her husband's name. One thing I have to say in favor of these fill-in-the-dots ballots is that they make write-in votes a lot easier!

You bet there's voter suppression in NY: it's called the closed primary system!

The answer to both Babs and Paul is...the election happened in September. This was more like the way the Electoral College works. And we were the Electors.

Right, but if you're a republican or an independent in Brooklyn you're completely shut out of many elections. Or you can be a dem/ ind in Texas and face the same disenfranchisement in many districts.

It's stupid regardless of which party is guilty of it.

For the record, I'm registered for the Pastafarian party. We're still trying to get on the ballot.

I was at PS 92 too! but i voted around 9 am. I pretty much get home from work around 9pm so that wasn't going to fly for me. but i was pretty surprised at how empty the place was. more volunteer pollers than voters. and only a handful of 20's-early 30's voters, myself included.

I also voted at PS 92 and can report that at 9.30am there actually were many people in their 20s as well as young moms (myself included!) So it might have just been your later time slot. However, it was a bit jolting to see that the line for the bottle redemption center across the street was at least 10 times as long as the line for the polling station.