Practically next door to 626 Flatbush lies 17 Chester Court, on the cute Tudor style cul-de-sac known as Chester Court. Less than a year ago, another of these houses went on sale for less than a million bucks. But according to hype-blog BK to the Fullest, this one just went for $1.5 million. Is it because of the wild decorating of the previous owners? Or is it the smell of upscale change for the neighborhood? Or the fact that Chester's on its way to historic district status? Or all three? 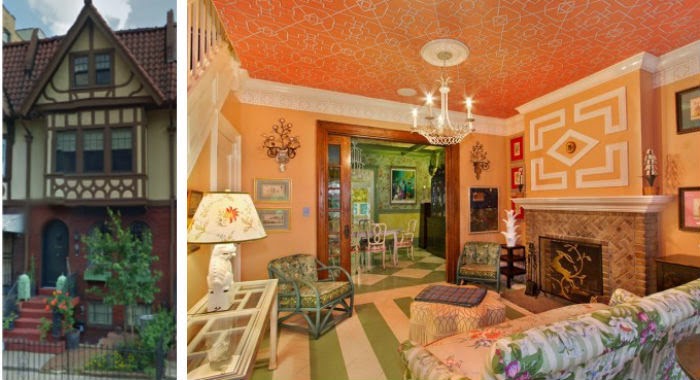 FWIW, that kid who writes BK seems like a real snot-nose to me, creating his own universe of panicked buyers. He simultaneously pokes fun at sky-high prices while hawking his services to worried-they'll-miss-out brownstone buyers. He reminds me of those know-it-all record store guys who snicker at your lack of knowledge about the core cannon of not-very-popular music, then sells you a 10-record box set of European noise that you listen to once and use as a shim for an old dresser. I mean, I'm one to talk, snot coming out my nose and all as well. But for some reason, lots of folks love watching a slow moving accident in progress, like the wild run up in real estate prices. There's no small amount of schadenfreude going round, of course, since most folks won't be able to afford a house in Brooklyn anymore, and it'll be fun to watch the rich get duped into overspending. But hey, folks did that in 2008, and now they're starting to look smart again. And some, rumor has it, are ready to sell their way out of the nabe, out of fear and loathing.
Posted by Clarkson FlatBed at 3:28 PM

The listing last year for 17 Chester was 1.399m not "under a million". So, yes, it went for over the ask but not to the extent your post suggests.

You're correct about this particular place. I miswrote. Others of these identical houses were going for less than a million, though one can certainly see why the gentlemen who interiorly designed this place expect a big premium. From the BK to Fullest post: