I've seen more cop-stops of cars and Dollar Vans in the last month than I've seen in 10 years. There is absolutely a major directive going on right now, coming from de Blasio and Bratton. I've even heard reports of citizens getting jaywalking tickets. No joke! DOT is going to repaint the new line markers in June. So...here's the official advice: 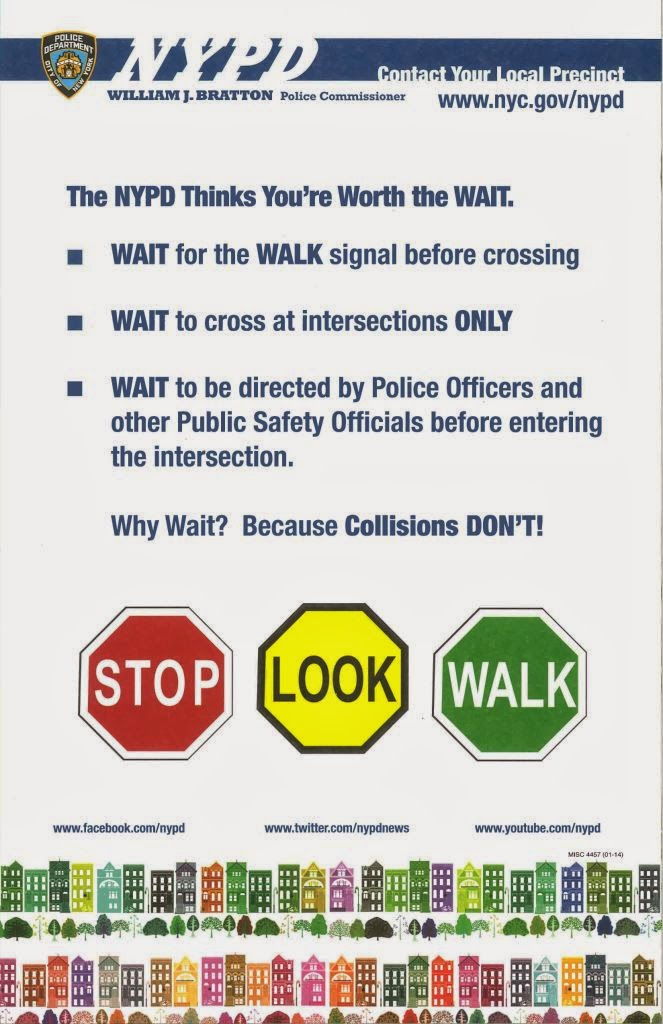 And let me just add that I LOVE NYC crossing guards. They're amazing, and most are super friendly. Every day that I ride my bike past Prospect Heights High School to drop off my kid at pre-K, that wonderful lady keeps an eye out for traffic and gives both of us big smile and good morning. The crossing guard at our school is equally charming. (I recall Albert Brooks once being a glum crossing guard in a movie where he and the Mrs. "drop out" of the rat race and buy an RV and set out on adventure. Soon into their trek, his wife lost their whole nest egg gambling, and he went into an employment office and asked for a job in the six-figure range. Or something like that. I think the movie was called "The Guy Who Dropped Out Of The Rat Race and Bought an RV and Then His Wife Lost Their Money Because She Had a Gambling Problem That She Didn't Know About Because She'd Never Gambled Before")
Posted by Clarkson FlatBed at 2:50 PM

FYI, you can file complaints against dollar vans with the TLC. I filed one against a particularly reckless driver a few months ago, and the prosecuting attorney called me recently to say the driver had plead guilty. http://www.nyc.gov/html/tlc/html/passenger/sub_consumer_compl.shtml

I hope they're also cracking down on the worst red light runners (no one believes that was a yellow light, wise guy), and the people who park in the crosswalks to run into stores. They whip into the crosswalk like it's a private parking space, coming dangerously close to hitting people. It's especially bad in the Flatbush/Maple/Beekman area.

The Albert Brooks movie was "Lost in America." I'd forgotten about the crossing guard scene but here it is:
http://www.youtube.com/watch?v=8nTA9lTI6Bk

My favorite scene is when Brooks goes to the casino manager (played by Garry Marshall) after his wife has lost all their money and he tries to explain that his wife didn't know what she was doing and it was all a big mistake and could we have our money back and let's forget the whole thing... pure yuppie clueless sense of entitlement. Of course, the casino manager throws him out.

As far as the ticket blitz, I hope it isn't a fad that'll fade away with time. I love the idea behind Vision Zero. But it's going to require a complete change of thinking on everyone's part—pedestrians, cyclists, motorists. It means a "safety first" mentality even if it means you get to your destination a minute or two later. When it comes to big changes in human behavior, I'm not the optimistic type, but then who ever thought that smoking would be virtually banned everywhere? (Oh if only dollar vans could suffer the same fate...)

I also love the concept of Vision Zero. This would mean safer roads for everyone.

It would be wonderful if this was implemented in our neighborhood quickly. I plan to e-mail the DOT to advocate this. The traffic around here is scary, particularly on Flatbush Ave. There have been several occasions when I thought I would be injured even though I followed all the traffic rules.

mary, I remember telling my bf once on the phone about how I could have died at the intersection of Washington and Empire. I was crossing east on the south side of Empire and I had the light and the right of way. This huge SUV, heading westbound, was making a left turn from Empire onto Washington. He came barreling through the intersection. He obviously didn't see me (and apparently didn't care), and he narrowly missed me. He didn't even bother to honk his horn and he certainly didn't say sorry.

I wish cops from the 71st were to lay in wait on Empire near Washington and Franklin more often. There should be enough moving violations to make a significant contribution to the upcoming crackdown.