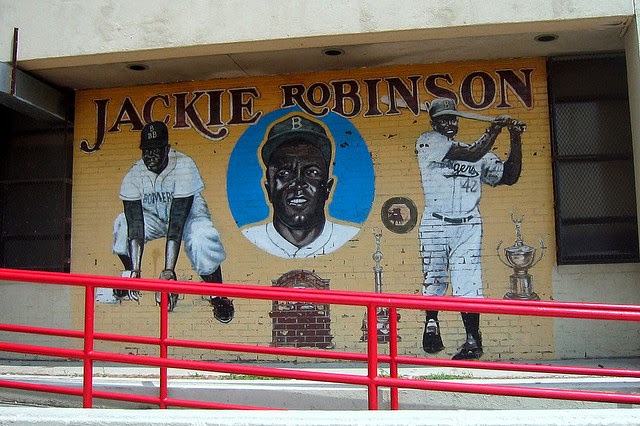 It has become clear to this blogger that PS375, the Jackie Robinson School, a/k/a the school that most Lefferts and Caledonian families are zoned for, is problematic. Possibly, even corrupt. The principal, assistant principal, and the superintendent of the District are all culpable in keeping the school from changing with the times. And by times, I don't just mean being open to integration, i.e. welcoming newcomers to the school, or heaven forbid, holding an open house or school tour. I mean that one-by-one Brooklyn elementary schools are recognizing that they must create an internet/social media presence and actually market themselves and whatever strengths they have so that choosy parents - the ones most likely to help bring positive change - attend and get involved. (I know I'm stepping into a landmine here, but screw it. This school has sucked for long enough and it's time someone called them out. I look forward to being proven wrong, but I'm not hopeful.)

Without going into details (I've forwarded what I've learned to higher-ups - we'll see if they respond), this school will require the persistent demands of local parents to convince the DOE that the status quo is not acceptable. For decades now, parents have sent their public school kids out of zone and, mostly, out of district. Finally two District 17 schools are beginning to break down the segregated monolith that characterizes the backward local District 17. Both PS705 and PS770 (practically out in Brownsville for chrisakes - but dang good according to parents) are experiencing a diversity heretofore not found in the district. Also, the Caton School is being seen as a bright spot for its warm environment and high marks for school vibe, as well as a super strong dual language focus. A reviewer at InsideSchools noted the way the principal brings math into the everyday in an effective manner. So it's not all doom and gloom. And if you've discovered other diamonds in the rough, by all means let us know!

Here on the Q, a post criticizing Superintendent Buffie Simmons led to an outrageous outpouring of disparaging remarks and scores of alleged misdeeds, though the personal stuff I would just as soon disregard. Shortly after I posted that piece, I got a call from the DOE about an investigation over Simmons' behavior and the outcry on the Q. I also received a bogus letter from an attorney, suggesting that I must immediately take down the comments and provide said attorney with the names and/or IP addresses of commenters. Having a semblance of respect for the 1st Amendment the Q of course refused, and the "attorney" claimed to be "suing Google for that info, so I might as well turn it over." I called Buff's bluff, and never heard from them again.

Enough is enough. Even though parents of older children have gone elsewhere, I think it's time to stand together as a community and demand the ouster of the administration at Jackie Robinson and the reconsideration of the performance of Superintendent Simmons. What set me off? The ridiculous survey results from PS375, which you can peruse here: Survey results - PS375. The overwhelmingly positive response from teachers who unanimously recommend the school is firm proof of a longtime rumor that teachers were intimidated into giving positive results.

If there are bold parents out there prepared to go the distance so that future generations of children can reap the benefit of an improved school that serves ALL folks in the neighborhood, please email me. I can't lead the effort, I'm just too overbooked, but I'm more than happy to offer my unconditional support and access to the contacts I've collected. PS92 will be seeing a change in leadership, probably next year. So another short-term option would be changing the zoning map, which sends some parents three times farther away to their zoned school.
Posted by Clarkson FlatBed at 2:33 PM