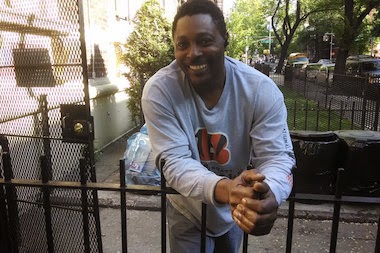 There's another Shaun White. OUR Shaun White, and there's no question WHICH Shaun White I would want to be around in an emergency.

Shaun helped an old lady escape from a fire at 465 Ocean Ave early this morning, just below Caton (yep, that's in the Q's catchment area). You can read the whole story, as related by Trevor Kapp and Aidan Gardiner of the Daily News.

FLATBUSH — A good Samaritan hoisted a disabled woman onto his shoulders and carried her from a burning apartment Tuesday, witnesses and the FDNY said.

Shaun White saw Aloma Malcolm's grandson struggling to get her down a fire escape from her fourth-floor home at 465 Ocean Ave. in Flatbush as thick black smoke billowed from windows behind her at 6:25 a.m. "I ran over and started climbing up the fire escape," said White, 41, a building superintendent who works across the street.

"They were on the third floor. I saw he was struggling and I said, 'Gimme her.' I threw her around my left shoulder and brought her down to the landing. It happened so fast. The fire was blazing. It was chaos. All I was thinking was get them out."

Malcolm, 69, who uses a wheelchair, complained that her throat hurt and was taken to Maimonides Medical Center in serious but stable condition, relatives and fire officials said. Three other people received minor injuries but refused medical attention at the scene, a fire spokesman said.


Shaun, you get the Q's first ever Super Hero award. Color me impressed!
Posted by Clarkson FlatBed at 1:39 PM

This guy is amazing. I finally created an account just to say that.